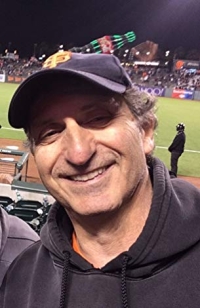 Backyards to Ballparks:More Personal Baseball Stories from the Stands and Beyond

Hear me on Talkin' Baseball with Justice Hill

Hear Me on Top Fan Rivalry!!

May 02, 2022 by Eric C. Gray
I recently spoke to Bill of Top Fan Rivalry about my love for bothe the Giants and the Mets.  You can listen to the Podcast.
Read More

The Story behind a World Series, a Tragedy and a Friendship

Feb 21, 2021 by Eric C. Gray
Walking on the beach in Cabo San Lucas, Mexico, in 2015, Lynn and I met a guy wearing a Colorado Rockies hat. Because I never miss an opportunity to talk with someone about baseball, I started talking with Luke. He told me that his cousin, close like a brother, might have a great story to share. When Luke gave me Gregg’s email address, he cautioned me to be very delicate and sensitive when I contacted him. When I spoke with Gregg, he appreciated Luke’s admonition, but he was open to discussing the story and allow me to use it for the book.  You can find it on P. 6. in the chapter Generation to Generation: Family and Baseball.
Read More

Jul 20, 2020 by Eric C. Gray
Soon after I started this project, I became acquainted with Dan, who sat in the seats in the row right in front of me.  We would chat during the game about the Giants, work, and trying to marry off my daughter to one of his friends; of course, I would periodically bring up my book, and the possibility of a story. Then, at a game in 2011, the season after the Giants first of three World Series Titles, Dan turned around and said, “You are in my living room!”   Click on "Read More" to find out what that was all about!

Dan's incredible story involves his grandfather Frank, a Giants fan from NY to San Francisco, who was in the Air Force during World War II and carried a miniature baseball glove, given to him by his wife. You can find the story in the chapter What Baseball Means to Me on page 147.
Read More

The Story behind a Story- Two Ball Dude Stories Couldn't Be More Different!

One day early in the 2013 season, I went down to speak to the ball dude who was working the game that day and briefly relayed a story.  I asked if he had a story he would like to share.  And he quickly said yes.  I gave him my email address and was unsure if I would hear from him.  I did.

Gary Fralick (Frano)’s story just made me cry.  You will find it in the chapter Home Runs on p.244. If you have the book, read it before you read the rest of this piece.  It was beautiful.  The power of doing the right thing, which can be just a simple gesture, and how it affected, by my count, five lives, including his own.   And all the adulation he got for just doing that simple thing which, to him, was, well, what he thought anyone should/would do.  Just an amazing story.

Feb 09, 2020 by Eric C. Gray
As Lynn and I were in a van taking us from our vacation spot in Cabo San Lucas to the airport, I started talking (rinse and repeat, see my other pieces) with Marie and Larry, visiting from Seattle, about the book.   Naturally, I didn’t recall that we had ridden IN from the airport with them a week earlier, but I pushed through my embarrassment and peppered them with questions nevertheless.  Marie said she would send me a story.  Oh, she did, and you can find it on p. 241  in the chapter Home Runs!
Read More

The Story Behind an Airplane Ride and a Couple of Stories

Feb 01, 2020 by Eric C. Gray
Lynn and I were on our way to Washington, D.C., to visit our son David, and his girlfriend Lisa, in November 2015.  We were sitting in adjoining aisle seats, and a nice young woman, Anna, had the misfortune of sitting in the seat next to me.  It has been well documented, by self-admission, how I will talk to any unfortunate soul within range about this book.  On this flight, Anna was my target...When the plane landed, and I turned on my phone to check my email; imagine to my great shock and delight, I had received a long-anticipated email from Lisa with the wonderful story (that involved me) which you can find in the chapter Triples on p.232!  I read it through, smiling the entire way at my own expense, and turned to Anna.  “Look”, I said, “this is amazing, this is the story I told you I was waiting for, look at the date, it is today”  As promised by Anna, I also  got a great story from her boyfriend Billy which is in the chapter Love and Baseball, on p.45.
Read More

The Story Behind a Story- How a Friendship is Born

Jan 13, 2020 by Eric C. Gray
The greatest and most unexpected positive outcome of writing this book has been the making of new, good friendships.  I have detailed some of them already in other posts, and, as Sonny and Cher sang in 1967, The Beat Goes On.  Four or five years ago, I connected with a guy on one of the Facebook baseball groups I had joined.  I contacted Rick Lenaburg on Messenger, or whatever it was called at the time, telling him about my book project and asking if he had a story he would be interested in sharing. You can find Rick's story on page 213, in the chapter Triples.
Read More

The Story Behind Two New Friendships - Fastball John, DJ, and Me

One day I was messagin g with a guy from Ohio.  He suggested I contact someone he was friends with, former MLB pitcher John D’Acquisto, who began his career with my team, the San Francisco Giants.   I was reluctant at first, because I have never felt comfortable contacting famous people, especially to ask a favor.  It just isn’t my nature. Nevertheless, I contacted him through messenger, and thus began a series of conversations about the topics I love best:  baseball, music and politics.  At one point, as I described my project, I asked if he had a story he would like to contribute.  He apologetically said he was not able to do that as he was in midst of writing his own book.  When we later had a chance to meet in person, when John was on his book tour for Fastball John, he came over and gave me a bear hug like we had known each other for a hundred years.

John D’Acquisto was gracious enough to write a testimonial for Bases to Bleachers which you can find in the very front of my book before the Table of Contents.

The Story Behind a Story - Vin, Jose, Karla, David, and Me

Nov 22, 2019 by Eric C. Gray
From the outset, I knew that there were a few stories I really wanted to get from a first-hand perspective, the only way they would appear in the book. One that I truly coveted was the first home game the Marlins played after pitcher Jose Fernandez died.  I heard all about the game and hoped I would find someone who was there to share that memory. I was lucky to meet David Clemmer who lives in Florida and I asked him if he knew anyone who might have been to that game in which Fernandez was honored by the Marlins, Mets and, of course, the fans.  David had been to that game and did he have a tale to tell! You can find it in on p. 302, in the chapter Famous, Historic, and Memorable Games.
Read More

Oct 26, 2019 by Eric C. Gray
As I read the story Sarah sent me on my phone, I had to contain myself while reading her amazing tale.  It was not only one of the best, but one of the most important stories I had received.  My first thought was “This is great” followed by “but there’s no place for it in my book since it isn’t game-related.” My last thought was the key one, which was that I HAD to find a place for it!  YOU can find it on page 242 in the Chapter, Home Runs.
Read More

The Story Behind All the Stories - How I Did This

Oct 10, 2019 by Eric C. Gray
How did I collect the stories for the book? First I asked friends for stories, and then asked them to ask their friends.  I asked people around me, whereever I was.  I used Facebook to extend my reach online.  For more than seven years, I could not be contained. Just ask Lynn, she will confirm.
Read More

The first “story” submission I got from my son at the beginning of this project was not exactly stellar.  After several years of encouraging, urging, nagging and scolding, he finally sent me the story that appears on page 13 and 14 in the Chapter, Generation to Generation: Family and Baseball.  I gotta say, it made me blush a little.

The Story Behind a Story - Lynn gets coffee; Eric hits a home run.

Sep 15, 2019 by Eric C. Gray
Lynn wanted her usual morning cup of coffee so we set out to find a coffee shop.  Eric, as usual, was in pursuit of stories, so he found his way in -- a young woman wearing a T-shirt with the name of a baseball stadium.  But it was the eavesdropper who had the real story!  Find it in the chapter, Mickey, Can I Have Your Autograph , on page 269.
Read More

The Story behind a Story-The story that inspired the book

Sep 10, 2019 by Eric C. Gray
You never know when a random act and its unintended consequences can end up changing a life, in this case mine.  Andy Berger’s story is about going to his first game with his Cub Scout troop. It is in the mini-chapter My First Game, on page 319. His story was also the inspiration for the book, Bases to Bleachers.
Read More

The Story behind a Story- It's a small world after all.

Aug 30, 2019 by Eric C. Gray
This is the story of how I met Dean Zemel, the author of a story in Bases to Bleachers on page 23 in the chapter Let's Beat the Traffic, and the surprising discovery we made several years later.
Read More
4/uQFKesFbIqHfSk6L7J6QhwlzX_gSJt5eJKvnIIA5MJB4DMlTfqHrIoU
Created with Pub Site
Created with Pub Site