The Story Behind a Story - Vin, Jose, Karla, David, and Me

As I began to collect stories, I knew that there were a few I really wanted to get from a first-hand perspective, the only way they would appear in the book.  Kevin Mitchell’s bare-hand catch; the Bartman game (more on that in the future); the ball that bounced off Canseco’s head for a homerun.  There are many others.  Another that I truly coveted was the first home game the Marlins played after Jose Fernandez died.  I heard all about the game and hoped I would find someone who was there to share that memory.

I became friends with Karla Olmos, as I have with so many others, through Facebook baseball groups.  We had some nice exchanges, she sent me a story, and said that, as a die-hard Dodgers fan, she would be coming to San Francisco several months later to see her Boys in Blue play the Giants for Vin Scully’s last game.  As I had tickets for that game, we agreed to meet up and then, as several months went on, we both just forgot.  Halfway through the game I remembered, but didn’t a phone number for her, so decided to try to contact her through Facebook Messenger, as that was how we conducted most of our communications.  One of our phones was close to dying, but we managed to connect and agreed to meet after the game.

We met at the Willie Mays statue in front of stadium; with me was Lynn, and friends Sid and Janet.  With Karla was her best friend and stadium-hopping accomplice David Clemmer.  We chatted for a while, about the game (who won?), our teams, Vin Scully and my book.  David now lives in Florida and I asked him if he knew anyone who might have been to that game in which Fernandez was honored by the Marlins, Mets and, of course, the fans.  David had been to that game and did he have a tale to tell. Dee Gordon.  Bartolo Colon.  Don Mattingly.  Hats on the mound, two teams honoring Fernandez, no dry eyes in the stadium. You can find it in on p. 302, the chapter Famous, Historic, and Memorable Games.  You can also find Karla’s story in the chapter What Baseball Means to Me, on p. 167.

When I went back and looked at my scorebook, I realized that, the year before, or perhaps earlier that very year, when Lynn and I visited our friend Beverly and attended a Mets/Marlins game, the pitchers that day were Matt Harvey and…Jose Fernandez.  That day, then, was memorable simply as a good pitching matchup.  In retrospect, it became so much more.

Karla and David, it is great to be friends with you and thanks for your wonderful contributions to the book. 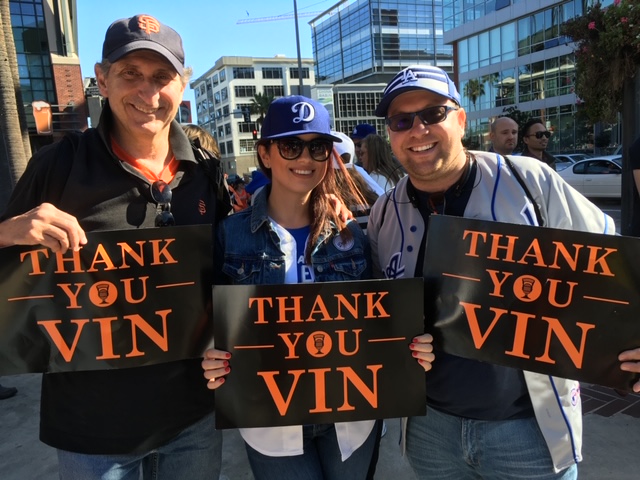