The Story Behind Two New Friendships - Fastball John, DJ, and Me

I joined Facebook baseball groups to seek stories from as wide a range of baseball fans as I could find, from around the country and, in fact, the world. I began contacting folks who made interesting posts or comments.  I had some pretty interesting conversations and received quite a few terrific stories.  One day I was messaging with a guy from Ohio.  It was pleasant for a while, but then it took an odd turn.  However, before that, he suggested I contact someone he was friends with, former MLB pitcher John D’Acquisto, who began his career with my team, the San Francisco Giants.   I was reluctant at first, because I have never felt comfortable contacting famous people, especially to ask a favor.  It just isn’t my nature.

Nevertheless, I contacted him through messenger, and thus began a series of conversations about the topics I love best:  baseball, music and politics.  At one point, as I described my project, I asked if he had a story he would like to contribute.  He apologetically said he was not able to do that as he was in midst of writing his own book.  And then the most amazing thing happened:  John sent me some excerpts from his draft and asked me to take a look at it.  I was, well, flabbergasted.  I mean, what did I, someone he barely knew, do to deserve his trust?   Of course, I dove right in, just absorbing what he had astonishingly decided to share with me.

A year or so later, John was on his book tour for Fastball John and came to AT&T Park for a book signing.  A few days before his appearance, I told him I would come down to meet him and buy the book.  So, on the day AFTER I went the first time, which was on the wrong day, I once again drove down to the park and walked into the Dugout Store.  He was chatting with some folks, and when he was finished, I said, “John, I’m Eric Gray”. He came over and gave me a bear hug like we had known each other for a hundred years.  We chatted for a while about his book, my project and then he signed the copy I purchased.  Then, John’s co-writer, David Jordan, who was sitting quietly behind the signing table, introduced himself and signed the book, and we chatted for a while as well.  It was a wonderful half hour.

Back home, I opened my new purchase, a baseball book with many of the chapter titles being some favorite rock and roll songs:  (Take it Easy – Jackson Browne/Eagles; Brandy – Looking Glass; Sundown – Gordon Lightfoot) or references to songs (Hotel Oahu – (California) – Eagles , Boys of Autumn (Summer) – Don Henley).  And what the heck, maybe it is a stretch, or maybe At the End of the Line was for the great song by the Traveling Wilburys, End of the Line.  That’s my take, and I am going with it.  How could this book not capture me?  I was Hooked on a Feeling (B.J. Thomas).

The book is great, and I certainly recommend it to all baseball fans, a personal reflection about John’s life and career.  But more than that, for me, is that this is a great example of the most unexpected and rewarding outcome of my project, the chance to meet and become friends with so many terrific people.  John was gracious enough to write a testimonial for Bases to Bleachers which you can find in the very front of my book before the Table of Contents.  We chat periodically on messenger, as I do with David.  I had the chance to have a couple of drinks with David in New York, and I hope to meet up with these guys, separately or together, in the future.

Baseball, like music or politics, can be great fun (or torture) to follow and become involved with.  But friendships, like family, is what life is all about, and I appreciate my two new friendships. JD, DJ and me. 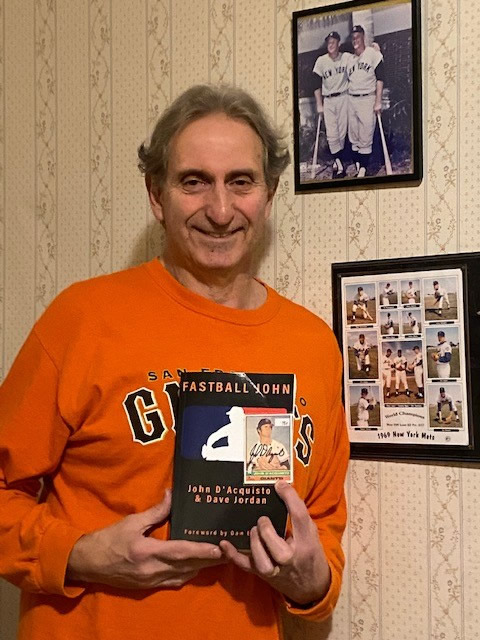