Soon after I started this project, I became acquainted with Dan, who sat in the seats in the row right in front of me.  We would chat during the game about the Giants, work, and trying to marry off my daughter to one of his friends; of course, I would periodically bring up my book, and the possibility of a story. A couple of years passed, and although I saw some of his friends, I didn’t run into Dan again for a while.  And then, at a game in 2011, the season after the Giants first of three World Series Titles, Dan turned around and said, “You are in my living room”.  What he was saying was that during either the playoffs or WS in 2010, he had taken a selfie with his friends and there I was, in the background of the picture.  It was a special game, and he enlarged the photo and hung it in his living room, with me right there. Again, never missing an opportunity to talk about the book (as I have so clearly documented throughout the book and on the website and on…well, you get the idea), I did. He promised me a story; not unlike with many other folks (see the story about my son David), it took a while to get, but, oh man, it was well worth the wait.

The story involves Dan’s grandfather Frank, a Giants fan from NY to San Francisco, who was in the Air Force during World War II and carried a miniature baseball glove, given to him by his wife.  Dan’s grandfather was shot down, rescued, imprisoned, had the glove taken from and returned to him, and ultimately was released at war’s end.  He knew that little glove, his good luck charm, had something to do with it.

Well, I gasped when I read that story, and teared up several times.  The story has nothing to do with the play of game, but everything to do with Frank’s love of the game, passed down to his son and then his grandson.   Every time I read that story at a book event, I tear up and so does the audience. You can find the story in the chapter What Baseball Means to Me on page 147.

Dan, you of course live in Chicago now, so I don’t see you at any Giants games.  Maybe some day we will get together, once more, for a game at either Oracle Park (is that what they call the Giants park now?) or Wrigley Field.  And we will take a proper, intentional selfie. 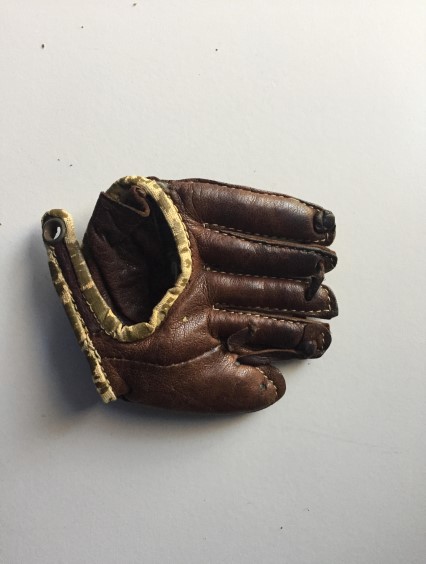