The Story Behind a Story - Lynn gets coffee; Eric hits a home run.

On June 4, 2015, Lynn and I were in New York City for our bi-annual visit.  Lynn wanted her usual morning cup of coffee so we set out to find a coffee shop.  As she was ordering her medium non-fat latte, and getting me a cup of English Breakfast tea, I started chatting with a young woman who was wearing a Wrigley Field T-shirt.  A reasonable target, right?  We spoke about baseball, and the Cubs, for a while, and she took my business card and said she had a story for me.  The young man to her side overheard the conversation and said that he had a story for me as well.

Jesse was a Boston Red Sox fan, newly relocated to NYC.  We chatted baseball for a while, what he was doing in NY and just other various things and he assured me that I would in fact receive an email from him with his story.    I said great, I look forward to it, and Lynn and I went on our way to whatever activity we were doing that day.

That night as I was checking email, I received a message from Jesse.  With a story.    But, I mean, a really, really great story.  A saga in a day, the story that kept on coming, even when you thought you’d reached the end.  It could have gone in the chapter “Home Runs” because it was THAT great.  I put it, more appropriately, in “Mickey, Can I Have Your Autograph?” 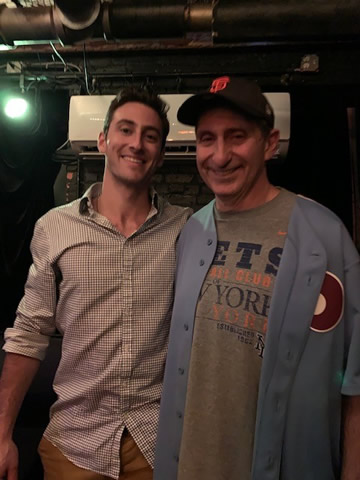 Jesse and I stayed in touch, and he came to a reading I did in NYC in June 2019.  I read his story, which I generally do, he bought a copy of the book which I personalized and wrote a note in  and we chatted.  The next day he called and said that he hadn’t thought about the story in quite a while, was pleased to hear it, and called his mom to tell her.  His phone call to me was to inquire if he could buy seven more copies of Bases to Bleachers.  I said yes.

I remember two other things about the day I met Jesse.  In his email that night, he ended it by saying “Your newest fan”.  That was very touching and sincere.  The other thing:  I never heard from the Wrigley Field T-shirt woman.   Still, I scored a big hit from that morning.